ISON in SOHO
A couple of views of ISON first fading in SOHO C3 and the new tail reappearing in SOHO C2.
Those with a keen eye will see the ISON gas tail swing away clock wise  the C3 images and persist across the perihelion passage to continue to grow  in C2

Ground Viewing 20131130
No luck as the comet was not condensed or bright enough, just dusticles and smudges. I could see some thermals when i pushed the pixels around with imageJ.

Update 20131130 ISON gets Hot!
You already know this and much more,but the data lag means we have to wait for the good images.

Update 20131129 - Well is was Fryday  for ISON. It has been quite surprising, I'll post images when the good data is publicly available. But you may like to see these two long HI1A sequences.Here are my two avi's , may not load in windows viewer so use quicktime. Log scaled and contrast adjusted to make one pixel bright on ISON nucleus. Shows the tail material better.

Make that four
A fourth small comet has appeared in the HI2A FOV. Comet Nevski..
Comet ISON has brightened and is interacting with passing CME material.

Three comets in the wind
ISOn, Lovejoy and now Encke are all detectable in STEREO HI2A images from 2013110
ISON showing some elongation. CME materials is passing by, long ION tails are being seen from ground images of all these comets. Encke is also in the FOV of STEREO HI1A showing some tail dynamics.

ISON in the solar wind

Recent images from the ground have seen some tail disturbances of LoveJoy. A CME plume is passing by, more are following.

I tweaked these images and data from the Goddard  and STEREO NASA guys to show where ISON is in relation to the windy inner solar system. You can also see the new Lovejoy comet tracking northwards. The colorful charts shows CME predictions into the future, while the STEREO images are from the past 5 days. 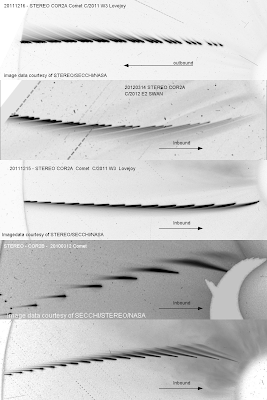 This image of comets disrupting or vaporizing as seen from STEREO COR2 image data. Well known Lovejoy is the only one that made it around the corner before failing. A few Kreutz examples are here and a SWAN detected comet. I think there are different events happening in the images. SWAN appears to vapourize while the others appear to disrupt before getting close. These are possibilities for ISON as it get close to the SUN.

update 20131203- Encke exhibits some tail dynamics closer into the Sun .

Comet Encke is now in the FOV of STEREO HI1A. It has some interesting features. I Can see the dust tail radial discovered by Spitzer and seen in this image from Micael Jager.  MJ image Encke dust tail

My Image processing in this anim GIF,

Found this very interesting use of USB TV dongles. This very smart guys had made a passive Doppler radar that can see aircraft and occasional meteors . I gotta try this at least once...need more info though.
see this link and follow to the guy doing the really cool stuff.

Found these $20 digital levels at Aldi. They have 0.1 degree resolution, so made two of these into an manual AltAz mount. Still a little bit wobbly but can carry the DMK51 and 26mm lens. I will try to image the current Nova if the clouds go way. Using a similar technique to processing STEREO/SECCHI images I hope to be able to see down to at least mag 8, hopefully mag 10. This will let me see Neptune and some of the brighter asteroids. The drift technique will allow the motion of the planet or asteroid to be detected. I propose to look at the SOHO kreutz comet path that occasionally passes overhead, perchance to see an early comet.

update 20130828 - Some efforts with this mount. Positioned the camera and let the FOV drift taking 1 second images Making a medium of 20 images. FOV is 15x10 degrees, down to appox mag 8,.

After a clear evening twilight on 20130812 the clouds rolled in with a few hours of rain. The clouds persisted until about 2012813 0400. About the time the Perseid Radiant was well below the north horizon from Melbourne Australia this single meteor was caught by the tail.
Posted by CometAl at 3:11 PM 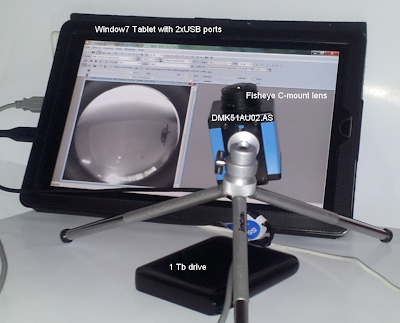 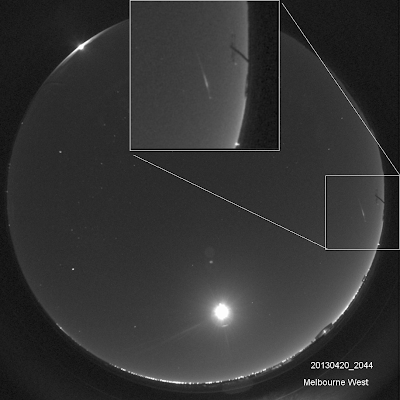 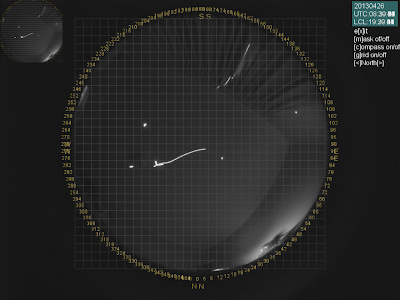 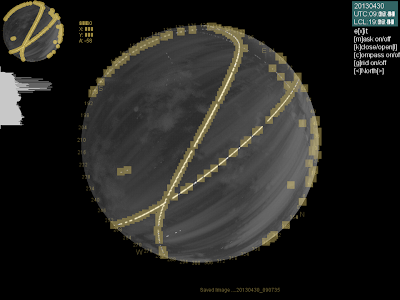 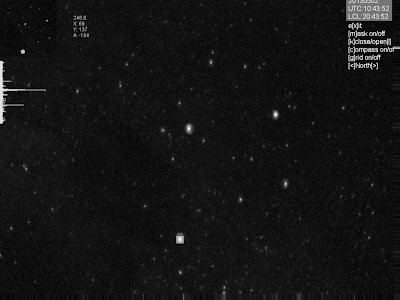 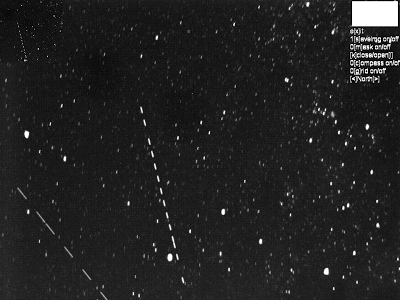 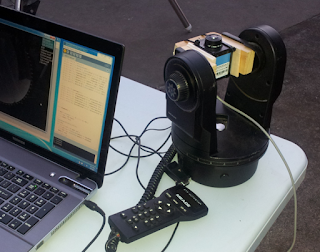 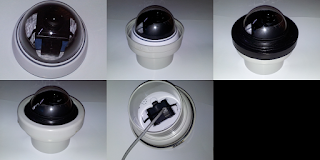 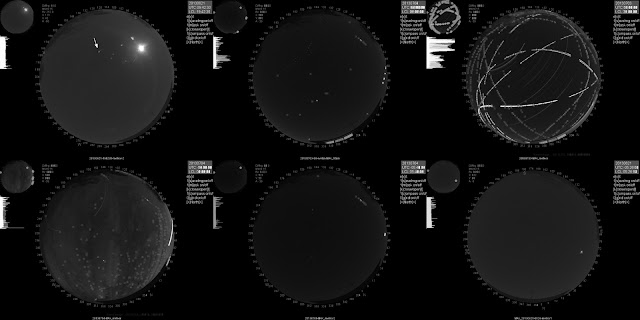 Update 20130401 - Great Comets depend on your Point Of View within your Field Of View.
A collection of STEREO comet views...... 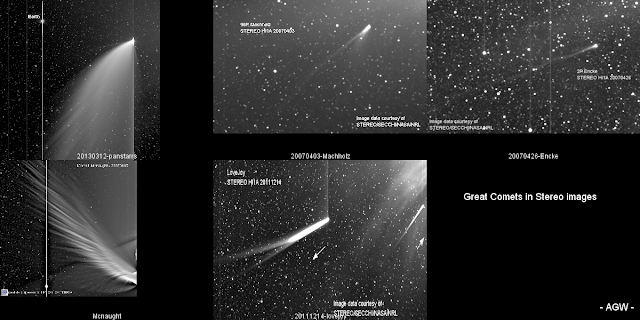 The wide FOV of the STEREO satellites have captured several comets that exhibit long and dynamic tails. This is comet C/2007 F1 LONEOS ..... more to follow..


This is Machholz 96P, showing a long Ion tail and a wedge shaped Dust tail. 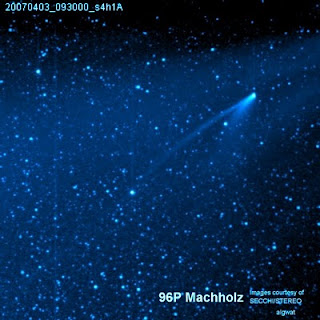 Update - 20130320 - Ground base images with longer exposures are now showing more of the tail structures that have been seen in STEREO HI1B images. 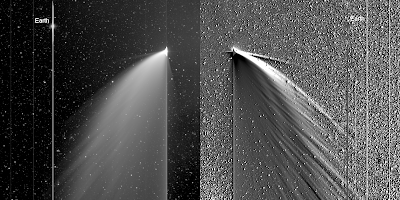 Update - 20130314 - Panstarrs enters the STEREO HI1B imager FOV on 20130309. The tail details have evolved into the following structures. The tail length is now beyond 10degrees.
Image data courtesy of STEREO/SECCHI/NRL/NASA. processed with ImageJ.
Remember McNaught from 2007.... 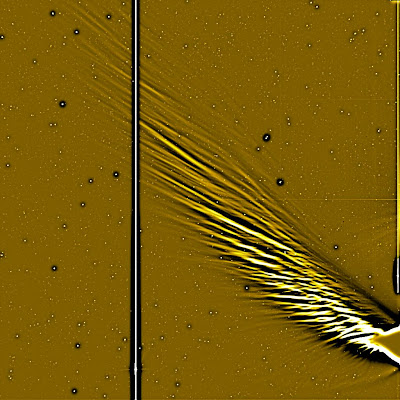 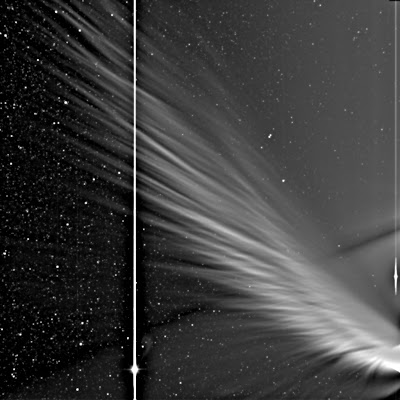 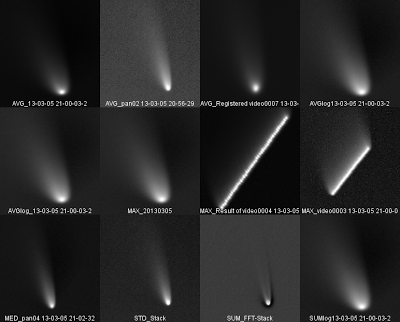 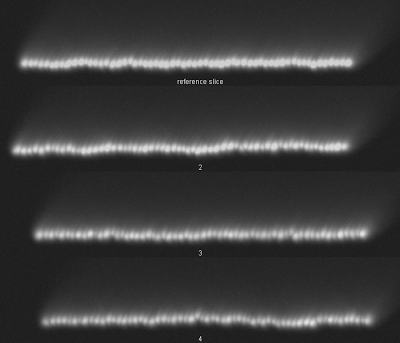 Update - 20130305 - This is probably the last effort with Panstarrs for a few days. Finally got to put the ED80mm and DMK51AS on to the comet head. I let it drift across the FOV taking 1sec images
Still to work over the set of avi's. Here is a first look at the data... 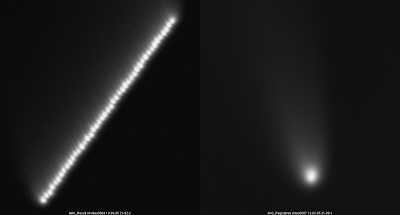 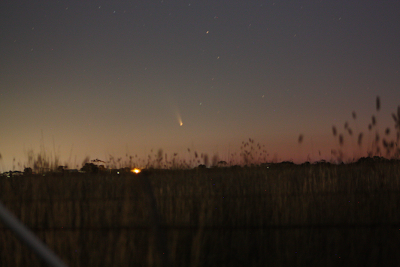 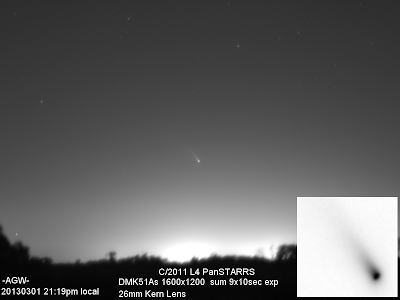 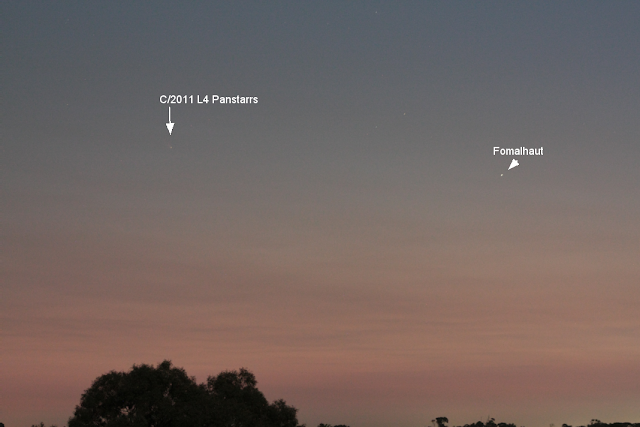