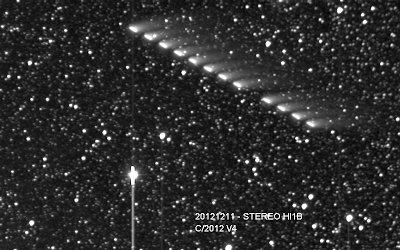 Currently in STEREO HI2B imager is a comet showing a dynamic streaming tail.  This is due to interactions with the solar wind, standby for more interactions if a CME passes by.
This is Comet C/2012 V4, it has been said that this is a return of a lost comet D/1827 M1 (Pons-Gambart). But this has yet to be officially confirmed.