update - P/2012 A3 (SOHO) seems to be the official designation
While looking at the daily update of images from the STEREO HI1B imager I notice a reasonably bright fuzzy object travelling away from the sun, usually they are moving towards the sun and are kreutz comets. It can be seen in this short avi from STEREO HI1B images.

I thought it was bright enough to be found in the COR2B imager. I had reported the object to Mr Sungrazer at NRL. Bill Thompson checked the recent Cor2b images and was able to detect this object backwards for several days. It definitely was not a kreutz. 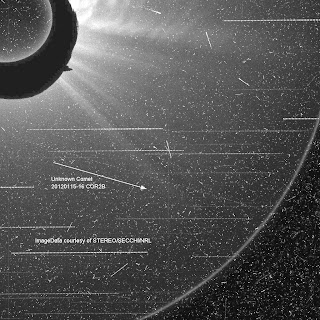 I was able to get Itelescope T11 to take a few images before it was to low, exposures of 60 Sec's worked ok. A small avi is seem here. 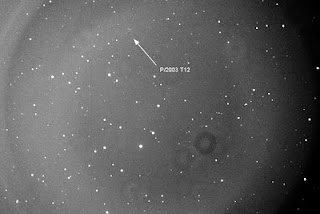 A little scepticism by fellow Astroblogger is answered here, extract from Comets-ML Yahoo forum.
G'Day Alan
How the heck did you do that? According to my ephemeris from the latest
update, the comet was only 12 degrees above the horizon at astronomical
twilight, to low for T11 (14, 5 etc).
If you got it during nautical twilight, I bow my head  in utmost respect.
Cheers! Ian

Gidday Ian,
Well I wasn't sure it would work. I had tried T14 a few days ago but it was still to low. Would not lock to my coordinates. I then realised that most of the telescopes are in the long roll off shed. So the horizon down below 15 degrees doesn't work.

Then after  the good report by Mr Hidetaka Sato (San).

Luckily the comet just made the FOV of the imager. I have added a full frame image to the blog entry. Thanks to T11 for getting so low....

20120209 - this comet is still tracking nicely, seen here near STAR HIP649. Images via Itelescope T11 when the comet was about 20 degrees above the horizon. 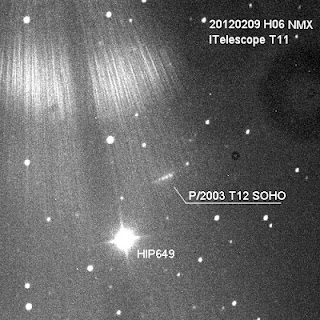 The comet emerges as twilght fades to dark